We are an Indian Nation: A History of the Hualapai People Jeffrey P. Shepherd 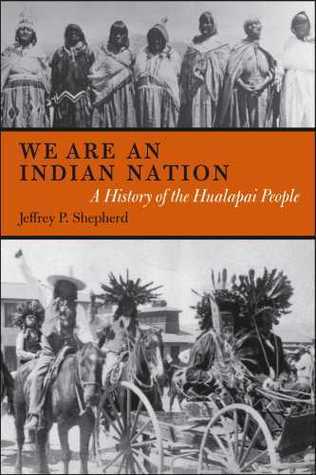 Drawing on archival research, interviews, and participant observation, Jeffrey Shepherd describes how thirteen bands of extended families known as The Pai confronted American colonialism and in the process recast themselves as a modern Indigenous nation.Shepherd shows that Hualapai nation-building was a complex process shaped by band identities, competing visions of the past, creative reactions to modernity, and resistance to state power.

He analyzes how the Hualapais transformed an externally imposed tribal identity through nationalist discourses of protecting aboriginal territory- and he examines how that discourse strengthened the Hualapais’ claim to land and water while simultaneously reifying a politicized version of their own history. Along the way, he sheds new light on familiar topics—Indian–white conflict, the creation of tribal government, wage labor, federal policy, and Native activism—by applying theories of race, space, historical memory, and decolonization.Drawing on recent work in American Indian history and Native American studies, Shepherd shows how the Hualapai have strived to reclaim a distinct identity and culture in the face of ongoing colonialism.

We Are an Indian Nation is grounded in Hualapai voices and agendas while simultaneously situating their history in the larger tapestry of Native peoples’ confrontations with colonialism and modernity.

Comments
Comments for "We are an Indian Nation: A History of the Hualapai People":